Wow, that was fun! Yesterday I spent a couple of hours walking around a convention center hall full of yarn. It was fiber paradise! Stitches West comes to town every year, and I've never gone. This year I looked through some of the classes and thought about signing up, but decided instead to just go to the Market portion of it. I may have bought a few things... 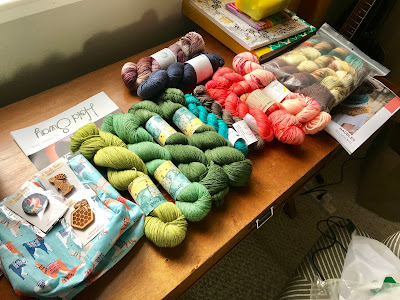 It was so fun to walk around and meet the folks that spin, dye, and make for a living. There were vendors from all over the US. That cute llama print on the left is a project bag I bought from a pair of sisters that were in town from Chicago. Obviously we chatted about how great the weather is out here. It's cold right now for Californians, but we forget how cold February is everywhere else! I was really happy to meet some more shop owners from around my local area as well. They are further afield than my usual haunts, but I'm excited to go visit their brick and mortar stores and discover new places. I can probably get Dave to go if I sell it as new restaurant and coffee shop discovery, too. 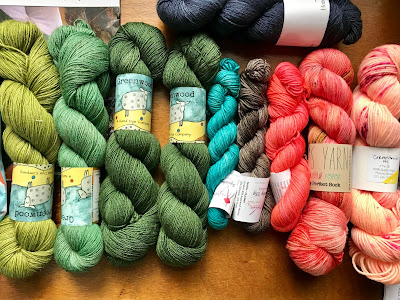 On to the yarn. The greens on the left are going to turn into a sweater. For SURE the best thing vendors can do is have projects made up with their yarns. Kits are a close second. This particular vendor had a very pretty striped sweater on display that looked doable for me. It's an a-line stye with an interesting hem and raglan sleeves, so it doesn't look overly complicated to make and I think it will be a forgiving style on my frame. I didn't love my last sweater attempt (also my first...) so this is kind of a risk to take with such nice yarn (it's got yak in it!) but I am looking at it as treating myself and getting over this fear of making garments.

In the middle are some mini skeins that I was happy to find. I recently bought myself a colorwork mitten pattern book and these are destined to become Latvian mittens. Two of them are just 25g and the bright peach is 50g, which should be the perfect amount. I would have liked to see more vendors with mini skeins like these; there were just a couple.

On the right, continuing in the peach theme, are a couple of skeins that I just really liked when I saw them. It was hard not to buy even MORE yarn from each of those two vendors, but I limited myself to just one each given that I don't know what I'll use them for. My view is that I should take advantage of the supply when it presents itself! There are some really creative dyers out there. I'm not sure why peach was grabbing me so much, but I definitely kept gravitating to it at nearly every stall. Maybe it's the gray days we've been having? 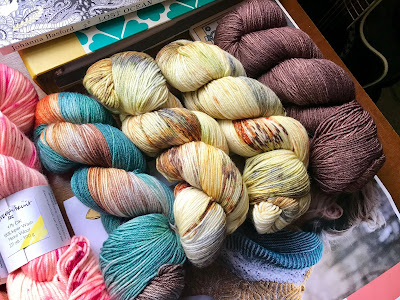 Speaking of creative dyers, THIS lady. Wow. I loved all of her yarns and so many came home with me, both these four and the two below. The silky feel of her fingering weight base also got me. She was from Missouri, so there is no way I would have just happened upon her without going to this market. Lucky me! The four yarns above are a somewhat unusual color combination, but they are a kit she had made up for a shawl that looks like so much fun to make. I was intrigued. Two of the colorways may also be named for characters in Outlander... That was something fun about this vendor - most of her yarns are in collections that are named for characters in movies or shows. Think like Harry Potter, Outlander, Doctor Who... I don't know why it is so much more appealing to buy something named "Jamie Fraser" than "variegated turquoise" but it is. A very clever idea on her part, and likely an endless source of inspiration for colorways. 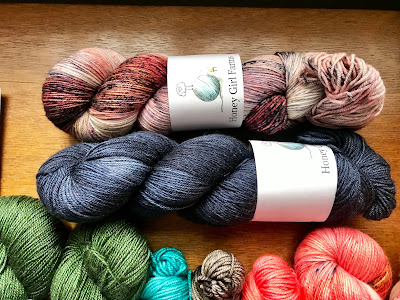 I know there are a lot of places to get yarn online, but I really enjoyed the opportunity to walk around and touch the yarns. Apparently I like some nylon and/or cashmere blended in with the wool. There's something I wouldn't have known without seeing like a zillion different yarns. It was also really fun to meet some of the folks behind all the fibers. I'll remember them and their yarns later on when I want to buy more. In like, 5 years. Because this is a lot. So much for a dwindling stash! I'm a lucky lady.
Posted by Alia at 5:48 PM