Ta da! The chicken quilt literally just came off the sewing machine with its binding, and it is still so stinkin' cute. 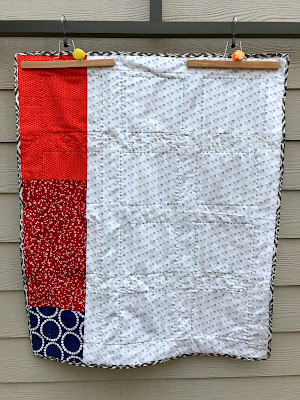 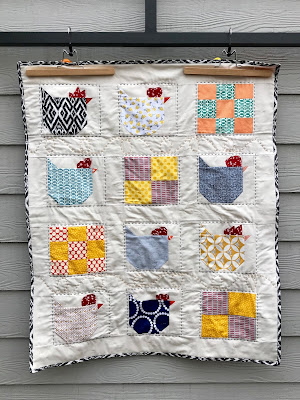 Despite the incredibly rainy weather we've been having, the universe gave me a few minutes of sunshine and no wind to hop outside and snap pictures just as I finished up. I am tickled. This quilt came 100% out of my stash of fabric, and even used up some orphan patchwork blocks I had leftover from another project. I pieced the back using up some big leftover pieces of the chicken fabrics and a print I had in the cabinet that Dave and I found so amusing when we were pulling fabrics. It's from a Scandinavian designer and I don't think it's meant to be chickens, but doesn't it look like little blue chickens all lined up in rows? Quite appropriate. 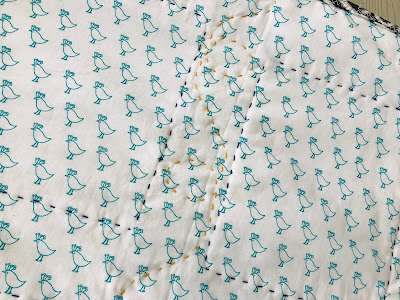 The only thing I didn't have already were appropriate colors of pearl cotton for quilting. I totally got way more than I needed, but I guess better too much than too little! When I used it to quilt my Modern Medallion quilt I learned how much I liked the look of the finished hand quilting. I love the slight wonkiness of the handwork and I had a lot of fun free-handing those egg-shaped loops. I was thinking I would also do a line of chicken footprints in red, but in the end I decided the red would probably command more attention than I wanted it to. So there are just a couple of lines of egg loops in gold and then all of the blocks are outlined with the blue. 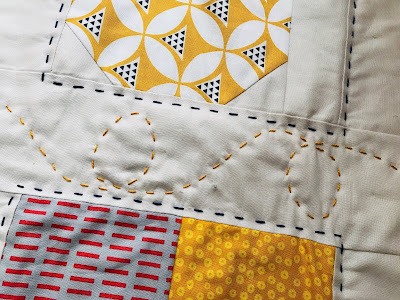 I trimmed it up and bound it this afternoon using the black and white ikat print that matches the chicken in the top left corner. I like the geometric pattern and sharp contrast of the black and white to accentuate the modern (given the rather traditional quilting choice) and also that it's still a neutral that works with the off-white backing rather than using a color to stand out. 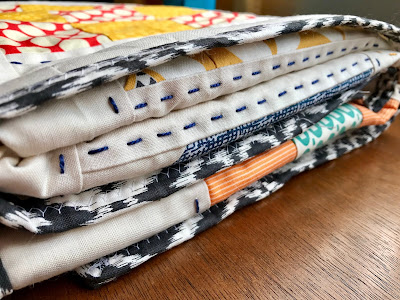