Well that didn't take long at all! Even given that it sat around basted for a while, I got this quilted in just one day and put the last stitch in the binding the day after. A+ for me, it is done WELL BEFORE the baby arrives. I knitted a blanket for Cindy's last baby and got a cute picture back, so I'm hoping she likes this quilted blanket for baby #2 and also sends me a cute picture again. 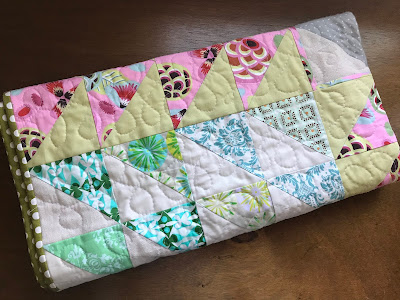 I was going to use my new quilting gadget that Dave got me to free motion quilt better, but I forgot that it doesn't actually require, in fact will not allow for, a basted quilt sandwich. Using that means I roll the three layers separately and quilt that way. Ooooops. Well I just decided to free motion quilt anyway. After all, many years ago I did a whole quilt in dogwood flowers that way, so why not give it another shot? Instead of a regular pattern I wanted to do loops. To make it easy on myself I did rows of loops across each row of squares in the quilt top, with two rows of loops to cover the flying geese that go horizontally. 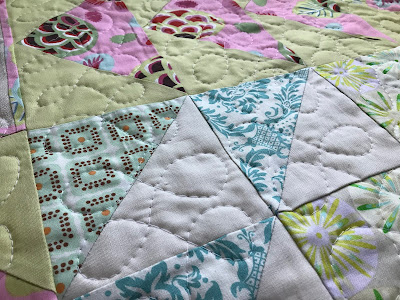 The nice, and unexpected, thing is that when you look at the overall quilt it just looks like it's got a lot of texture and loops everywhere. It doesn't look ordered into rows at all, which is super great because - ahem - it's not quite as regular as I'd envisioned it being. Between having the foot installed wonky the first time (or two) to bumping the rolled up quilt into the window sill behind the machine, there are more than a few hiccups in the stitching but you'd never tell if you weren't looking closely. I'm sure baby won't mind. 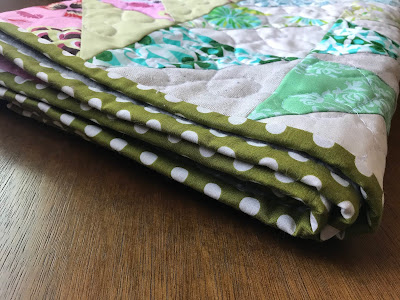 I found this great polka dot fabric in my stash and used up what I had to make binding that I machine sewed to the front and then hand sewed to the back. Normally I zigzag stitch by machine to tack binding down, but I've been on a hand stitching kick lately with the embroidery project I've been working on and hand stitching the binding seemed like it would be fun. It was, and the polka dots are much more visible than they would have been with white zigzags overlaying them. 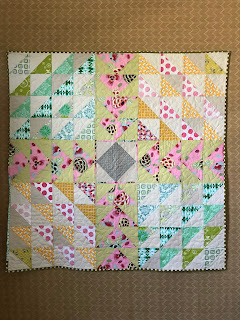 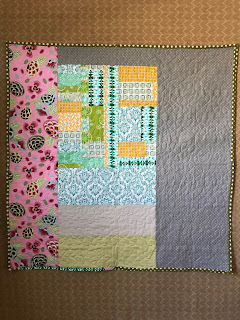 The quilt is a 41" square which is a nice size for a kid to toddle around with or to lay down on the floor for a play mat. It was also a good size to work with in the machine. I'm particularly proud of the patchwork panel on the back that used up every. single. scrap. of the fabrics I used in the front. It started out as a bit of play, actually. I wasn't sure what it would turn into but just kept sewing bits and pieces together until this came out. When it was done, I decided it would be a nice addition to the back. This whole quilt, with the exception of the batting layer, was made from scraps and small bits of yardage I had in my stash. There were no large cuts involved and it was really satisfying to end up with basically no leftovers. It's the perfect scrap buster project. Isn't it gratifying to find out what the little pieces in your scrap jars will turn into? 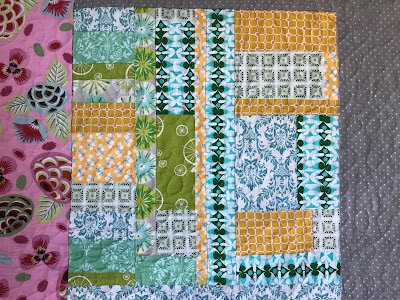