Ta da! My version of Nordic Triangles aka Minion Madness is done! To say I’m happy with this quilt is an understatement. Not only are the colors outside my usual yet super satisfying, I feel pretty good that everything except the big yardage (i.e. background and backing) was already in my stash and I found a way to combine them to make this awesome looking quilt. 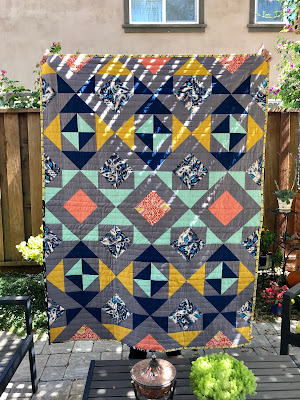 I’ve got lots of florals and more “feminine” prints so the challenge of making a quilt for my brother out of stash was a fun one to tackle. I think the liberal use of solids was a good idea, and even the oranges mostly read as solids. The only real print involved in the front is that blue Amy Butler ikat, but that’s got all the good video game colors in it (like old school Mario Bros!) so it’s pretty perfect. I kept the quilting simple and geometric, too. The orange thread really pops with all the gray and blue. The resulting puffy stripes work really well with all the angles and remind me of those super puffy winter coats. 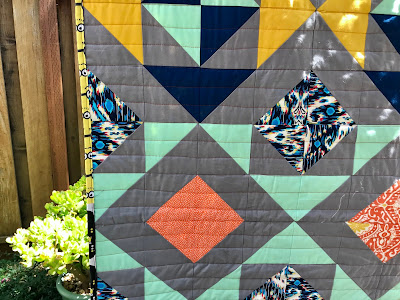 This binding makes me laugh, which I suppose was the whole idea when I bought it. I’m glad it worked out despite the larger scale of the print. The little eyes peeking around the edge of the quilt are truly goofy. 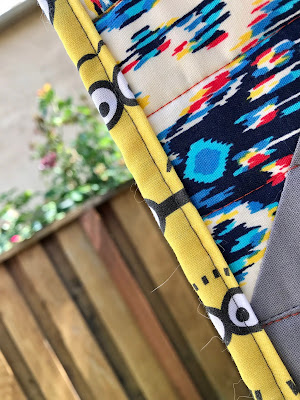 And then there’s the backing fabric. Along with a nice big stripe of eyes (which, after all, had to fully shine somewhere) I used a couple yards of minions in rockets. This print was what decided me in making a quilt for my brother’s birthday in the first place. Usually the backing is the last thing I think about but in this case I started from here. It’s a nice bright, hilarious print that is soooooo brother. 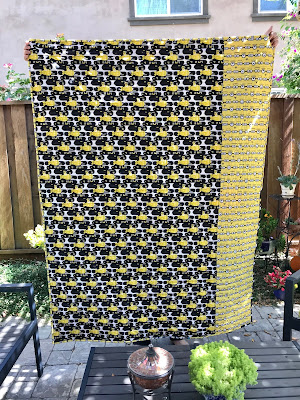 I can hear the little minions all shouting with joy as their rockets propel through the air towards whatever misadventure they’re about to get into next. I used gray thread on the back so it blends in more with the print figuring the orange would be too much. 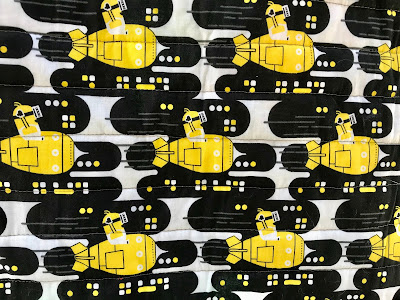 It turned out to be 51” x 68” which is a pretty good size. He’s a tall dude so this should be a good couch quilt for him to hang out under after all the kids are asleep. It will get to hang around until his birthday in October when it will be packed up and sent over to him, hopefully with a minimum of minion shenanigans on the way. 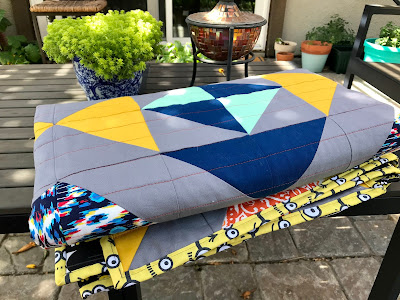