August seems like a long way away from March. In fact it is just as far from August to late December and the holidays. I guess that’s a bit of a comfort that not much time has passed since COVID barged into life in a big way. Though then I suppose it’s a sign that there isn’t that much time until Christmas. Yikes! Alternatively, there’s a lot of time until Christmas, and it’s been a correspondingly long time since we’ve been hunkered down doing our best to stay away from people we don’t live with? Nevermind, I’m not sure either of those scenarios brings any comfort. 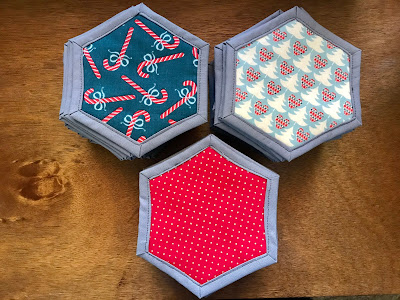 I finished my hexagons for the new tree skirt last week, and those little piles of pressed puffs are very satisfying. I considered hand stitching them but decided to try a few top stitched and then quickly realized everything was gonna be ok. They looked pretty questionable pinned down. I wasn’t sure things were going to line up at speed in the machine vs being able to get it ‘just so’ with hand stitching. Turns out I worried for nothing. It’s just fine. I am still glad I used thread that matches the background fabric. 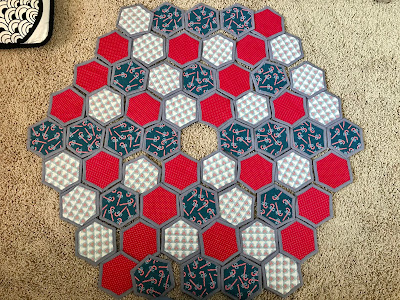 My current issue I’m having is that of layout. I (incorrectly) figured in my head that with three prints I would be able to lay this out without duplicates touching each other if I did equal numbers of each print. Ooooops. That turns out to be just wrong. Alas. So now I’ve got a few choices of layout, or as my mom so astutely observed, I could just make a few more hexagons to make it work and use the others for something else. 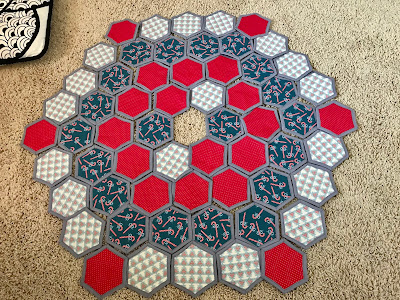 I’m not in love with any of the designs I’ve come up with yet. I like the mixed up look in the first picture, and I also like this second layout with the red focal points on the outside and the candy cane stripe in the middle. I definitely don’t like this last option with organized wedges. It just doesn’t read right to me. 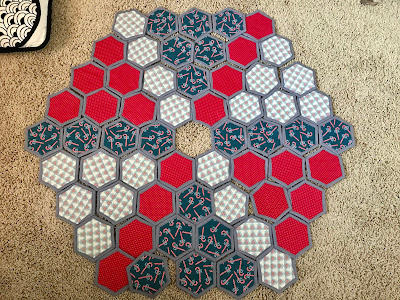 What I might try to do is make as much of the shape as I can with everything truly mixed and see if I like the way it looks compared to the second picture. In the second design, I could just take the two innermost red hexies out, make one more each of the candy cane and trees, and try the innermost round as an alternating blue/white round. At least there’s plenty of time until Christmas! Or is there??
Posted by Alia at 2:07 PM