I’ve been wanting to knit lately. That’s somewhat strange given the fact that it’s so incredibly hot outside - in the 100s! - but there it is. I should say that I also did finish a couple more hexagons for my tree skirt this week and picked out a layout, but that’s for another post when I actually have it done... sometime before Christmas. Back to yarn. Current mood: use things in the stash. 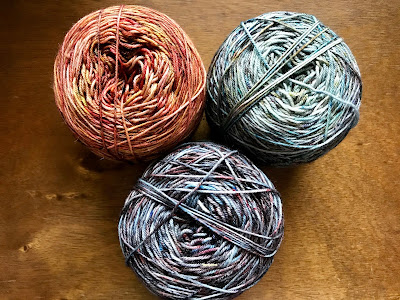 These three lovelies are from my Honey Girl Farms Outlander Yarn Club that I was in for a while. I was accumulating too many skeins without using them so I paused it. The colors are so nice and I really like the silky yarn base, so maybe someday if she’s still got it going I’ll start up again. Along comes an itch to make another large shawl and boom, three skeins will get used. It’s a somewhat unusual combination, but that is just what I was going for. This piece will have narrow stripes and panels of lace. In theory the stripes could be very contrast-y, but I am curious to see how the blue and green mottled yarns play together. I think once the fabric gets larger the stripes will become apparent. It’s reminding me of a dragon’s scales or a phoenix feather right now. Such pretty colors. 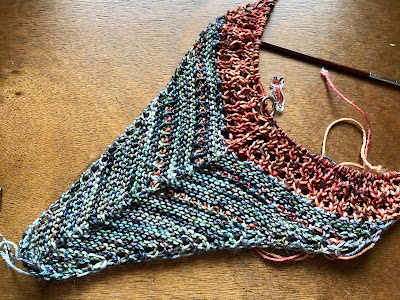 The pattern is out of a book I got down at a new-to-me shop in Monterey sometime before the pandemic - The Before Time. It’s going to be an asymmetrical sideways chevron which is a new construction for me. It should be really interesting!
Posted by Alia at 10:30 AM