This afternoon I started on some improvisational fabric play. I pulled out my bag of “precuts” that I made out of my scrap jars and went to town. I mostly made a mess at first until I landed on a set of 2.5” squares that I liked together. These are some of my favorite colors all pulled together into that Amy Butler floral print. It pairs very nicely with polka dots and penguins! 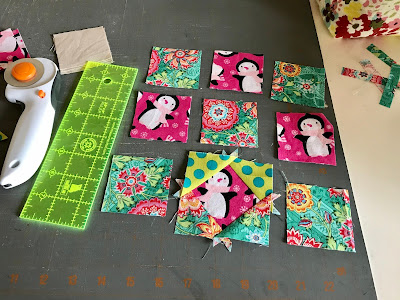 I saw a block online a few weeks back that I really liked. I decided to try to recreate what I saw using the pieces I had, no final size in mind. It turns out that you can definitely make a square in a square block using a 2.5” center piece as well as 2.5” squares cut in half for the edges. I read around a bit to see what different tutorials suggested and most had very specific, different sizes to use for the center vs the edge pieces. But I’m lazy. In the end just tried it out to see what would happen. All I had to do was trim a little bit when they were finished. It worked great. They were just a little over 3.25” and when everything was sewn together the block ended up being just shy of 9 inches square. The seams are crisp, the points match up, and it looks fantastic. I’m not sure this would work as well with bigger squares, there might be way more waste. I potentially landed on just the right size starting squares to make it work out ok. Dunno. 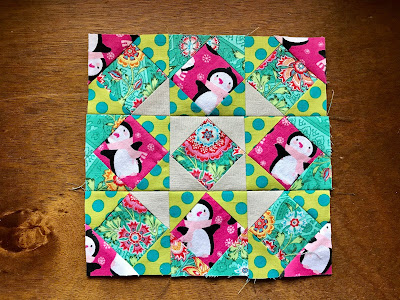 I really liked how the first block turned out, so I decided more were in order. As I worked on my penguins and florals I noticed that the colors were slant rhyme complementary (red/green) and so I decided I would do a couple more blocks in the other complementary pairs. This block below is also from all 2.5” squares and is fashioned after a picture of a pillow I had saved in my Pinterest inspiration boards. I don’t like it as much as I like the first one, but for now I’m going to keep it around. I think I want less of the lighter colors if I’m going to use them together. Between the white and the peach print it feels a bit washed out when sitting with my first block. It is about a half inch smaller in dimension, too, so will be more difficult to put together into the same piece. Still, I stuck with my initial plan of not worrying about finished size to keep the freedom of playing intact. 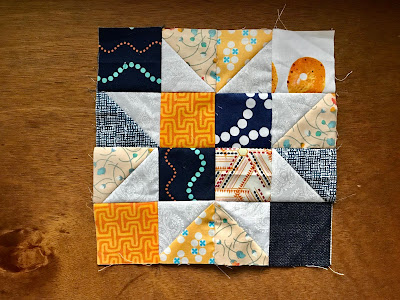 This last one turned out super cool. I actually was on the phone with a friend as I played around with squares and colors and layout for this one. I even sewed it while we talked. I started with some simple four patches from 2.5” squares and then from there made the other two blocks starting with large HSTs made from some 5” squares. I wanted more interest, so I started snowballing corners and using waste HSTs from that to do the same to the other side and ended up with two awesome looking blocks. They look hard, but totally weren’t - remember I was on the phone and randomly making decisions while doing this! When I sewed the four together I trimmed up the four patches to match the size of my improvised diagonals and that makes them look less symmetrical. I totally lucked out that the magenta triangles match up well with the two inner squares to make a cohesive shape. And I love it. It surprisingly turned out 9 inches square, the same as my first block. I think I may be making a different orange and blue one... 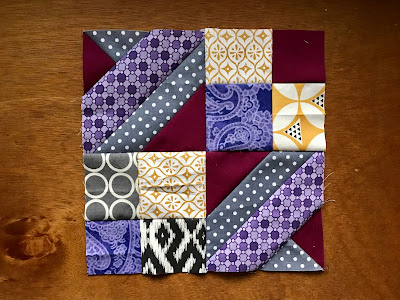 What to do with the fruits of my labor? Well, the photo for the first block was part of a tutorial on how to connect blocks that have already been layered and quilted. I think I’d like to that with these blocks, too. They will be fun small pieces for me to work on my quilting skills. I want to play with some shapes other than straight lines and see how I can use different shapes to enhance the block designs rather than just using an all over design like I have before. Then I’ll join them together. I think a 3 block strip for a wall hanging might look pretty nice in my studio. Then it can serve as a reminder that a little bit of unplanned sewing can be satisfying, too.
Posted by Alia at 9:22 PM