Ta da! My second largest project to date folds up nicely into a cute little pile. Amazing to think it took me so long to complete it. Ha! 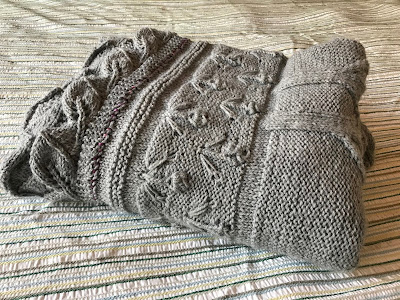 It does in fact roll out to quite a nice sized blanket. This is based on a pattern, but with a twist. I totally read the pattern incorrectly when I started and began with a field of flowers instead of the trees. There are supposed to be three panels of trees and two panels of flowers. Instead I found myself well into the first set of flowers before realizing my mistake. What I did to avoid ripping everything out was split the second panel of flowers in half so each pairs with the top and bottom tree panels and made sure that the dividing row patterns were modified enough that I still had the same number of rows in the blanket overall. I've worked a pattern by this designer before and don't recall having any problems, but it was a much differently constructed piece of crochet flowers, so I'm sure it was written quite differently, too. 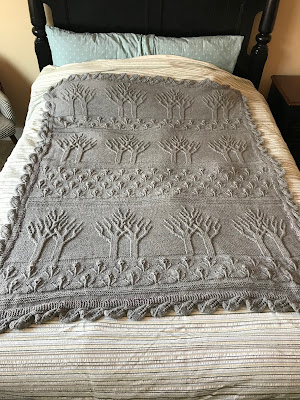 Regardless, I like the way it looks with that modification. Each set of trees is sitting in a field this way! Yet another example of how an oops can turn into a nice design feature. After a good soak in the bath tub it was quite heavy but rolling it up in a big beach towel and walking on it fixed that. I wire blocked the center panel to 54x64, making the total dimensions approximately 60x70 including the border. It basically coopted the entire floor of my studio and nearly all of my blocking boards for a good several days while it dried. 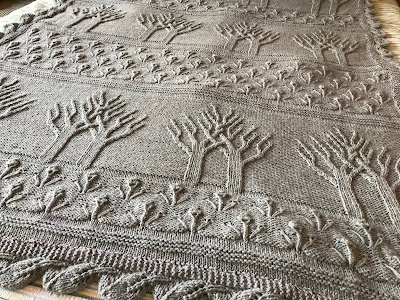 Instead of pinning all the leaves I just stretched them out to lay flat and let them dry as they will. They turned out fine. I finished up weaving in the ends from the border on Monday. Many knitters decided to skip the border altogether and I was tempted. It seemed like a pain to sew a border on such a large edge, but I am very glad I did. It gives the piece a little more whimsy than straight edges would. Like it takes itself less seriously. 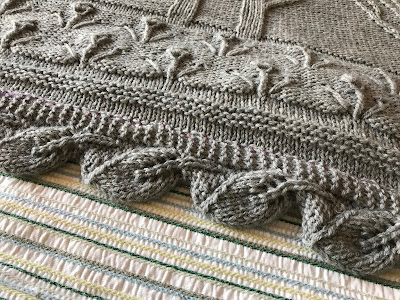 I'm enjoying the pop of purples on the back from where I crocheted on the border. It's not very noticeable on the front but goes nicely with the gray anyway. I do love the particular shade of this gray. It's cool like the coastal fog in the redwoods. The coast and the fog is further away today than when I started, but the cool coastal winds still come over the mountain behind our house to say hello. Those winds definitely necessitate a cozy blanket to wrap up in, waiting patiently on the quilt ladder in the corner. 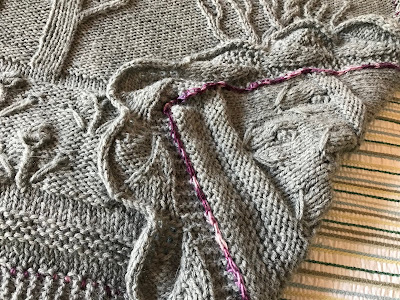