When life feels a little out of control, I like to find some order somewhere. Whether that’s making up the bed, doing the dishes, putting away laundry or.... assembling a quilt. I tried convincing myself that I wanted to sit down and work on my sweater but instead I ended up in the studio again chugging away at the sewing machine. It turns out that I didn’t have to trim much, a pleasant surprise. The cock’s comb blocks were ever so slightly smaller than the 10.5”  they were intended to be - about 10.25” - so I threw caution to the wind and started assembling blocks while eyeballing a scant seam on one side and an accurate seam on the other. 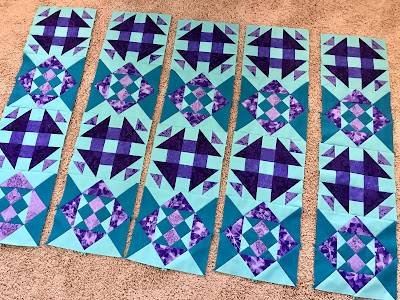 It’s actually quite nice the way the blocks come together because the duck and duckling blocks (the ones that look kind of like churn dashes) have a lot of points in need of monitoring as you sew, and the scant seam on the cock’s comb (patchwork square in the center) essentially made it so it’s single edge point was never cut off. So, even if the assembly was a little wonky, the points all worked out and everything was pretty even in the end. Phew! 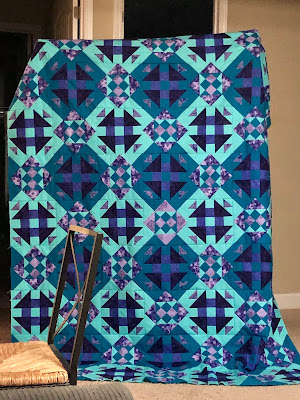 I’m behind there somewhere trying to hold up the gigantic top while showing it off to Dave last night after I finished the last big seam. It’s 70 x 90 ish right now and there is a pieced border yet to come that will add 5 more inches to each dimension. I’m not sure yet if I’m going to do the other two borders. It’s not quite the largest quilt I’ve made, I think that distinction belong’s to Samara’s hexagon crazy quilt, but it’s pretty big. It’s going to be a great bed quilt when it’s done.
Posted by Alia at 9:30 AM