red white and blue no. 2

Getting back to my red, white, and blue fix for a minute... I worked quite a bit on this pillow last weekend. After finishing the first one, another was sure to quickly follow. I've got two of these big pillows, so I'd like two thematically similar covers.

This time I dove into some of the books I've got on the shelf in my studio. I looked at different pillow patterns and quilt blocks and ended up picking a block out of my Shape Workshop for Quilters book that worked out great with the jelly roll strips. I had to make just a few simple cuts, a few sewing lines, and I had blocks in no time. It was pretty satisfying. 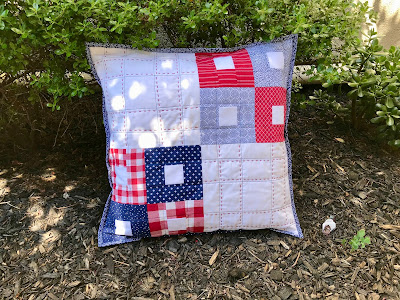 I paired two blocks with two large squares of white to make a pillow sized (24 x 24) piece. The quilting was partly done by machine and partly hand stitched. I had intended to do it all on the machine but I had no red thread! I actually really like the way the hand stitching stands out so I'm chalking that up as a lucky break. The stitching lines are just to either side of the white squares in all directions. I like the way the resulting "plaid" on the white space echoes but does not match the strong geometry in the pieced blocks. 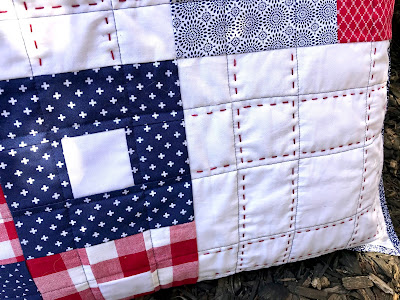 The backing is from my random large cut of gray canvas fabric with a blue zipper and navy stitching. I used a couple strips of one of the navy prints to make a binding and attached it as I would normally do a quilt binding (in contrast to the last pillow). 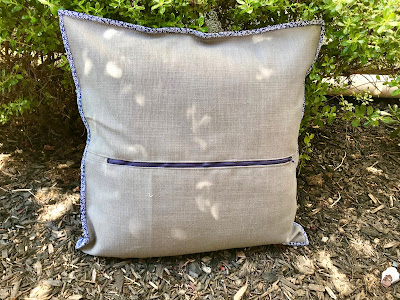 It was so hot again today, but I did pop outside to snap a few pictures and test these out on our new porch chairs. While I do love the pair together, I think they are too large for the chairs! I guess they will stick around inside on our living room couch like I originally planned. For now they're folded up and waiting for July. 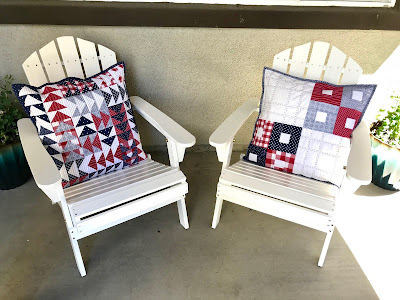