My sweater is finished! Of course, not without a little bit of drama. I realized while putting the needles away that the one I used for the body was a 4 mm (US 6) rather than a US 4. The whole sweater. OMG. The gauge was correct anyway so I guess that’s what really matters. Actually I did use the correct size needles for the arms, and when I compared the body to the arm there wasn't too much difference but I could tell the fabric on the arms was slightly tighter, not surprisingly. I took a deep breath, complained to Dave, then let it go and blocked it to the measurements. And it came out pretty respectably. 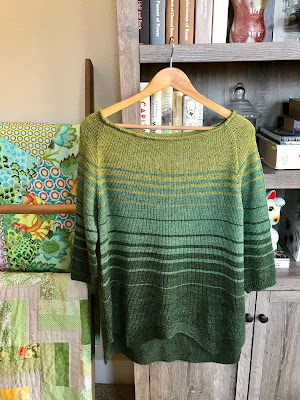 I messed with the fit the day after blocking and ended up being quite successful. What the issue really was, I’m sure in part because of my needle “oops”, was the armhole/neck area was a bit saggy. I took each raglan seam and did a mattress stitch up the two knit stitches between the decreases (got that trick from https://fringeassociation.com/2015/01/20/basted-knitting-or-seaming-a-seamless-sweater/). That gave a bit more structure to the shoulder area. 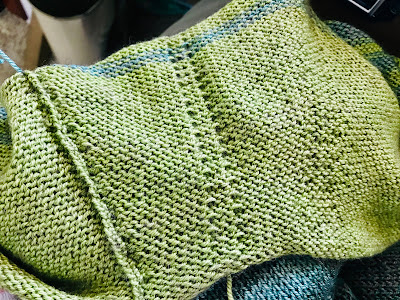 The photo above shows the inside of one of the shoulder seams where I've made the correction on the left raglan line and not yet on the right. The texture in the middle is the slip stitch faux side seam. Below is the same section of the sweater right side out. The left raglan is narrower by a stitch but doesn't look at all unusual. Importantly, it is significantly less stretchy along it's length so the shoulder doesn't sag down under the weight of the sleeve and body. 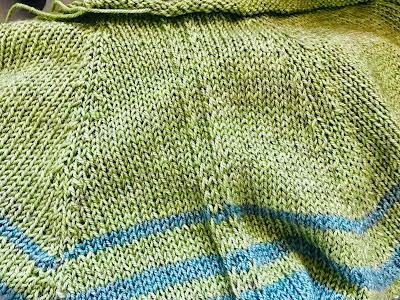 For the neckline I did a crochet slip stitch all the way around starting at a shoulder seam (that idea came from https://biscotteyarns.com/blogs/knitting/how-to-tighten-a-loose-neckline-after-it-s-finished) I did just the back and two shoulders first as suggested in that post, but then went for the full circle after trying it on again. For me it keeps the neckline from stretching out and off my shoulders. It is still a pretty generous boatneck, 12.5” wide or so. Below is a shot of both the raglan seam correction and the crochet along the neckline. Because it isn't a seamed neckline I tried to do it a few stitches down from the bound off edge so the neck would still roll. It took quite a bit of fiddling and patience but was totally worth it for the extra help it gave the shape. Thank you to the adventurous ladies who came before and shared those solutions to what must be common problems! 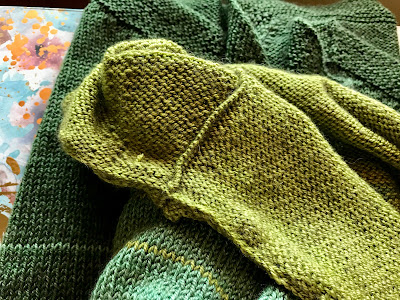 I bought this yarn and pattern at Stitches West in February of 2019 from an independent dyer in the marketplace, Greenwood Fiberworks. She had a red/pink version of this sweater on display in her booth and I am proof that it helped her sell some of her lovely yarn! The yarn is a wool/yak/silk blend and was nice to work with and had a lovely drape in finished fabric. The silk gives it a little bit of extra fancy without being shiny. I remember spending quite a while in her booth considering all of the amazing colors before settling on these greens. I really liked the medium green in the center and kind of worked from there. I thought about playing up its aqua tones but ended up deciding a green sweater would suit me nicely. 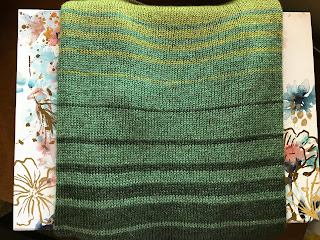 The original pattern is not written with stripes, but the dyer that I met made this modification and shared it. It didn't necessarily net her anymore skeins of yarn sold, but I think that was a clever way to appeal to those of us that like to make shawls with multiple colors. It's a gateway sweater of sorts. Indeed, this is just my second sweater I've ever made and I will admit to being intimidated but intrigued when I walked away with my bag full of yarn and the pattern in tow. 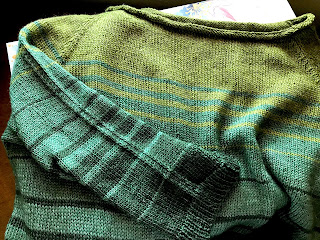 I am super happy now that I fixed my problem areas. It’s a very forgiving shape on me and I love the hemline design. All those short rows are worth it! I remember when I started out the short row sections seemed like they would never end. It was easy enough, but I was definitely counting the inches until I could stop purling and get to exclusively knitting in the round. I am really proud of this sweater not just because it's another project off the needles, and a significantly large one at that, but also because of the adjustments I was able to make to the fit. I also think the color combination looks fabulous and I'm looking forward to some crisp autumn days so I can drink a cozy cup of tea on the patio in this. 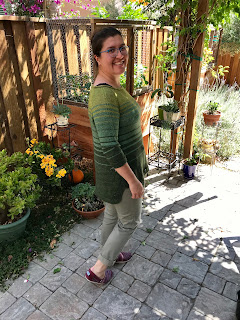 I know I will always think of this as my "quarantine sweater" because I started it a couple of days after the county officially issued a shelter in place order to prevent COVID-19 spread back in March. As I cast on I remember thinking it would be a good thing to occupy me while we were both full time at home and wondering if I would be able to finish it before it was over and we were back to being out and busy... we are not under a complete lockdown anymore, but there is still a long way to go.
Pattern: Hold Sway Sweater (my Ravelry page)
Yarn: Greenwood Fiberworks Yakity Yak in 'lime', 'seafoam', and 'pine'
Needle: US 6, US 4, US 3, US 2.5
Posted by Alia at 10:00 PM