We are still in (some form of) quarantine, but the world still turns and birthdays still happen. After finishing the fabric basket before my friend's birthday I worked on other things until last night when I realized I would be up in the area of her place today and could stop by to drop off her gift. But what to put in the basket? Brainstorming time! 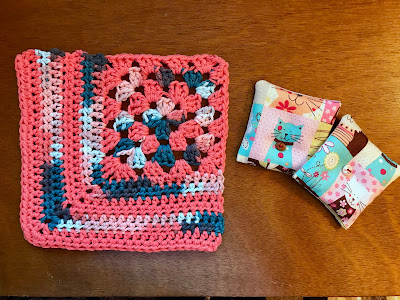 Here's what I ended up with. Those two kitty cat squares were recent cuts from the great scrap jar clean out and have ended up as lavender sachets. I still had lavender from a trip to Aix forever ago, and it still smells quite strong! Amazing. It took literally ten minutes to sew, fill, close, and attach little buttons on each of those. It was tempting to make all the sachets to fill the basket, but it's pretty big! Plus I happened upon some cotton yarn that I've been planning to make dishcloths out of. (In fact I'd already broken into the skeins during week one of this whole quarantine thing.) I've made her some before, but a refresh every now and then isn't a bad thing is it? That took a little bit longer, but Dave and I watched some woodworking YouTube on the couch together as I crocheted. The ends were taken care of this morning. 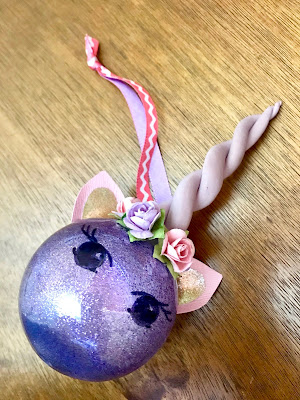 The unicorn I also made a few weeks ago in preparation for this particular birthday. She is made of the leftover pieces from holiday ornament making with my nieces and my mom. All it took was a few dollops of hot glue and some marker and she was all set. My friend is super into unicorns right now, so this was received well. It was all packed up in the fabric basket and popped right into a nice gift bag for some socially distant gift giving and an air hug! 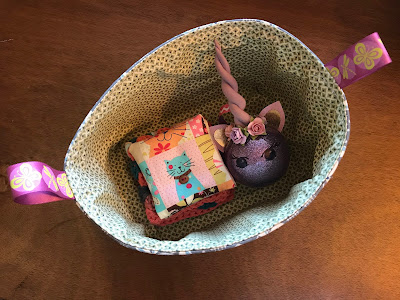