Last Friday morning was cool and cloudy so I did this: 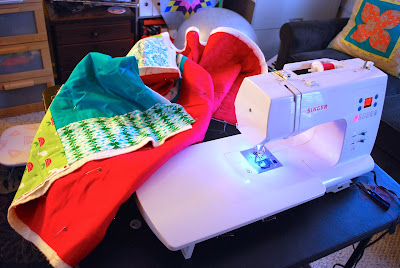 After quite a few months, I finally brought out the Little Whimsy quilt and confronted it. It had been folded up in the closet all basted, marked up with a grid of squares, and ready for quilting, but I didn't want to start in case I ruined it. I'm sure this is a familiar sentiment for many people who make things.

I had decided to use so much solid in this design to encourage (force?) myself to try some new quilting out in a place where it could be featured. Seen! I wanted an orange peel looking design, and ended up settling on free motion dogwood blossoms. It sounded like a great idea, and even looked great on paper, but the very first time I've ever FMQ'd was in April on a teeny doll quilt. It looked ok, but it's an awfully big leap (literally and figuratively) from a doll quilt up to an actual-person-sized quilt. 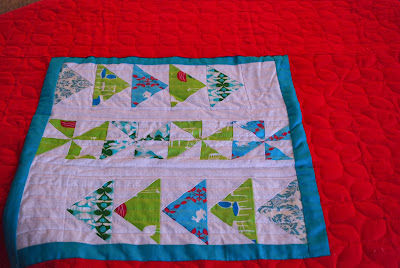 But I did it! After my first row of blossoms I seriously considered my seam ripper and randomly spaced straight lines the rest of the way. How did I ever think this was a good idea? My confidence had apparently gotten the best of me. I decided to try just one more row, and wouldn't you know it started to get easier. By the third row I was having fun and trucking along. A few hours later and I was done!

I had to let go of perfection. That's a big deal for me! We scientifically-minded folks are notoriously detail-oriented and obsessive about getting it right. Whatever it is. Maybe that's what makes me so good in the lab, but certainly here it works against me. 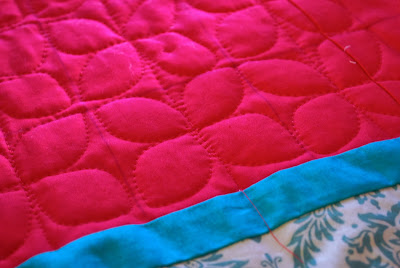 All of my dogwood blossoms are not created equal. The best one on the quilt top is that lovely little guy just up there, but certainly he's got some rather rebellious looking friends. But that's ok! Because you know, in a whole quilt full of blossoms, it's really hard to pick 'em out. The effect is about texture and the big picture. Yes, you'll see irregular petals when snuggled up in this quilt staring at the corner closest to you while drinking your tea (or milk... this is a baby quilt after all), but in the end that's character, isn't it.

I did rip out an occasional *really* bad set of petals, but I did end up leaving my first row in. For me. It blends in just fine and it will be kind of fun to show Kelly: "Hey, I got better, see?" Honestly she will be so excited about the quilt she won't care about a wiggly petal or two. I can already hear her say "ohmygodaliadidyouknitit?" because that's what she always says. 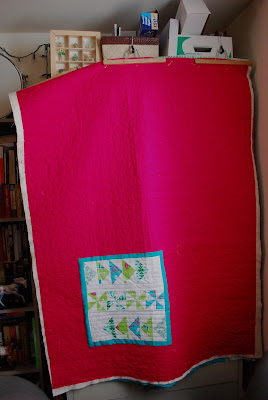 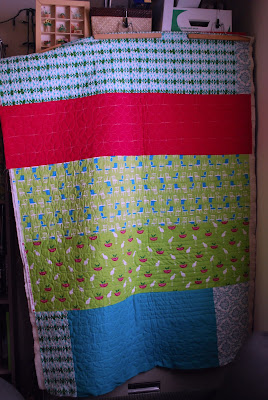 I used matching thread on the front (I'm not that brave!) and white thread in the bobbin. The white blends in nicely on the back with the prints and pops out my mistakes in the solid areas, but c'est la vie. I stand by my learning curve (it's really not bad at all). The area where the pieced block is has dense straight lines through it. I like the simple lines across the relatively complex piecing and the complex quilting on the ever so simple solid.

I'm going to bask in this accomplishment for a bit before getting to the binding. 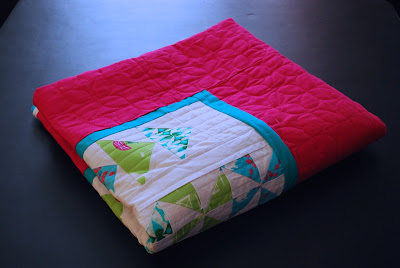 Linking up to WIP Wednesday at Freshly Pieced
Posted by Alia at 8:00 AM