After riding in the California sunshine, helmets can get rather.... icky. Think about it, a big piece of foam wrapped in velvet around your head while you exert yourself beyond the craziest pilates tape you've ever seen on top of an animal you can stand next to in a snow storm to keep warm. Sweating bullets is an actual thing. I know.

Anyway, a friend of mine at the barn mentioned to me that at her old barn they bought lavender sachets to pop in their helmets after they'd dried out. Knowing my non-horsey hobbies, she suggested that I could probably make them. Indeed! Birthdays for both this friend and my riding instructor are coming up in the next week, so I decided to whip up a couple to go with the knitted cowls I've been working on. 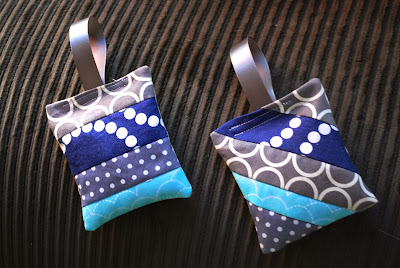 The barn colors of the group I'm a part of are dark blue and silver/gray, so I pulled out my blue and neutral scrap jars. After all, they don't need to be big to fit in a helmet, and it's always satisfying to use up little bits and pieces for small projects like this. 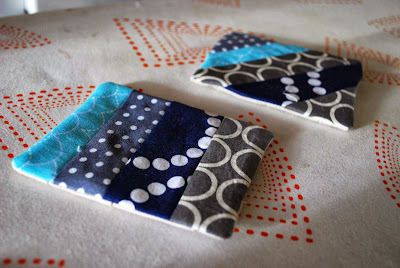 I cut strips of random widths from 1-2" and sewed them together into blocks which I trimmed into 4" x 4.5"rectangles. For the backs I took a long strip of linen I found in my scraps and cut it into shorter strips which I pieced in the same way. (this is not necessary... if I had linen scraps large enough to cut out big enough rectangle pieces, I wouldn't have bothered with reorganizing the strip of fabric)

I sewed the fronts and backs to each other, pivoting at the corners and leaving a gap of about an inch and a half or so open on one side. The corner seams were snipped, and the pockets were turned inside out then pressed. I use a crochet hook on most of my projects to poke out the corners; I find it doesn't poke through the fabric the same way I always seem to end up doing with knitting needles. 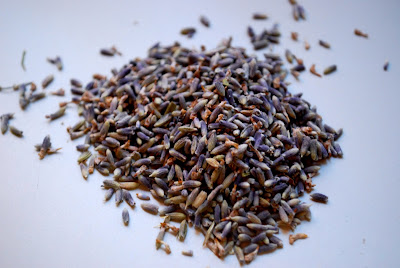 Using a funnel I filled the sachets with lavender, maybe about 1/2 cup each, ish. This is really just preference. I wanted the sachets to be full but not too firm or too floppy when I closed them. Goldilocks... just right.

This lavender is quite amazing -- I bought it at a street market in Aix-en-Provence a couple years ago and it still smells! Like super strong. It has been keeping my craft cabinet smelling lovely while I find uses for it. And it's such a nice memory. I highly recommend purchasing craft supplies on trips! 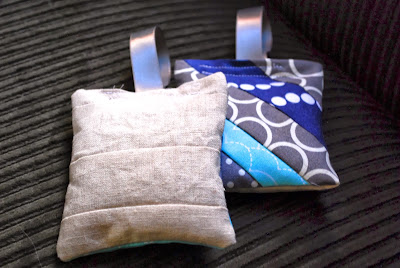 Since I want these to be able to hang on hooks when the helmet is in use, I added loops of ribbon into the seam before I closed them up. I had every intention of hand sewing the opening closed, but when I decided on the ribbon I also decided to just top stitch it to make life easier. I stitched two lines close to each other to make it more decorative, but of course it's also functional in that the ribbon is quite secure. 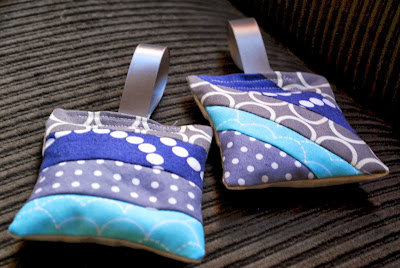 I quite like how these turned out. All told, they took maybe 20 minutes to make, and most of that was fiddling with the lavender. I hope they are well received (and that they help out our helmets)!

Linking up to Finish it up Friday
Posted by Alia at 7:30 AM