Once the chair was stripped, we used the old fabric pieces as patterns to cut out our new fabric. Instead of making the bottom out of several mitered panels the way it was originally done, I just cut out one big piece of fabric, draped it over the whole bottom of the chair, and wrapped it like a present. I did 90 degree 'hotel corners' at the front to deal with the extra fabric, and as a bonus I now know a new way to make my bed.

By the end of the night (11:30 or so) we had the bulk of the chair recovered. This was the point where Dave got to sit back and relax, because I did all the cutting and sewing. Though he did take the piping out of the original casing and also got me to stop stressing out about the fit of the back not looking perfect before we actually stapled anything down. I was pretty amazed at how the whole thing took shape really nicely once we started fixing everything to the frame. Pinching, shoving, pulling, it was all fair game and went really quickly! 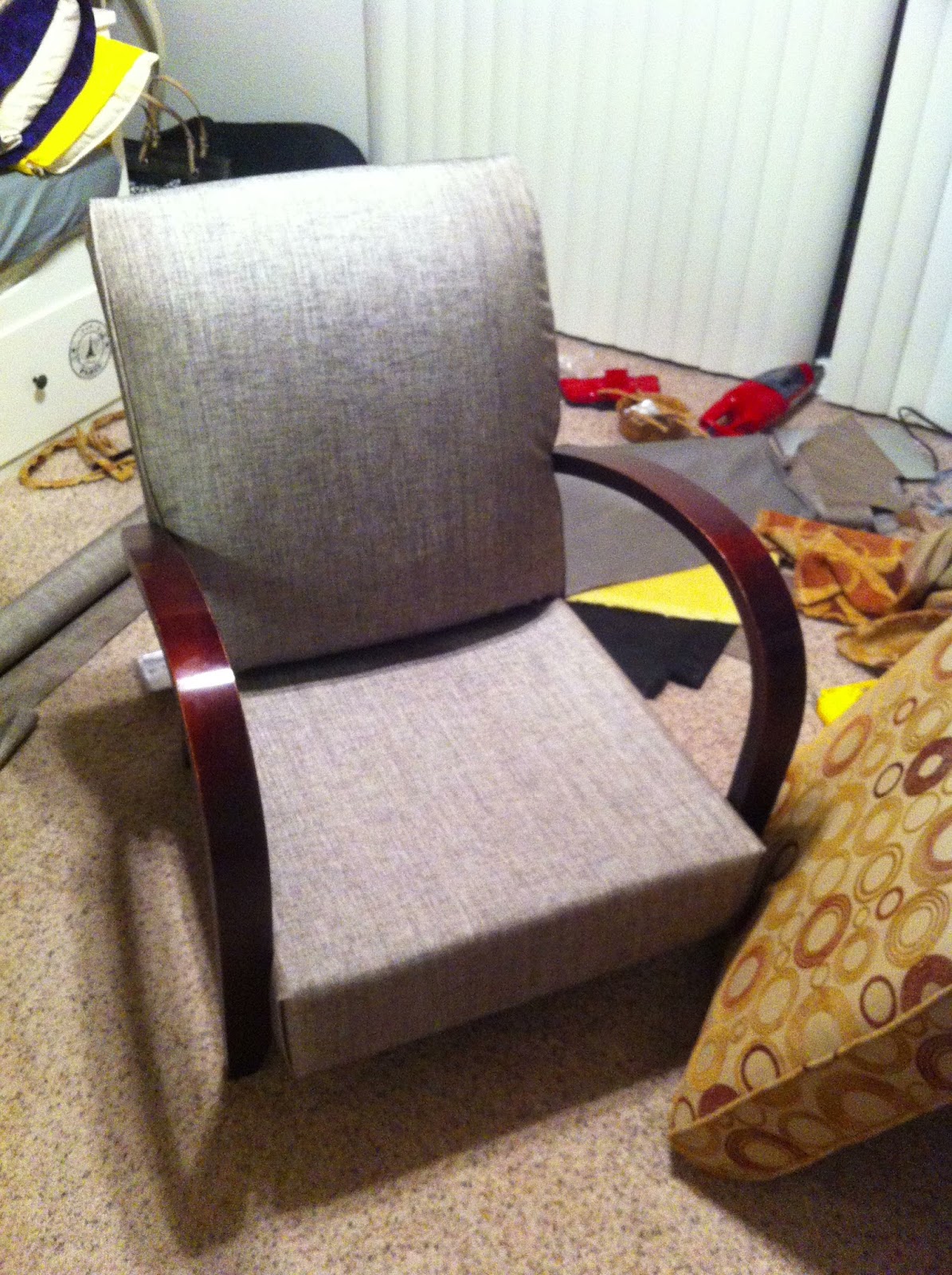 The only part we didn't manage to get done that first day was putting the back panel back on. The irony of the situation was that the arms are attached with bolts. Despite the sheer number of sockets we have to go with our socket wrench, and even that Dave asked if he should bring them up (jokingly….), our socket wrench was happily down in Palo Alto. Dave tried valiantly to reattach the arms using the pliers we had on hand, he did in fact get them off that way, but no dice. We called it a night and decided we wouldn't be sitting on the chair until we could tighten the bolts properly. 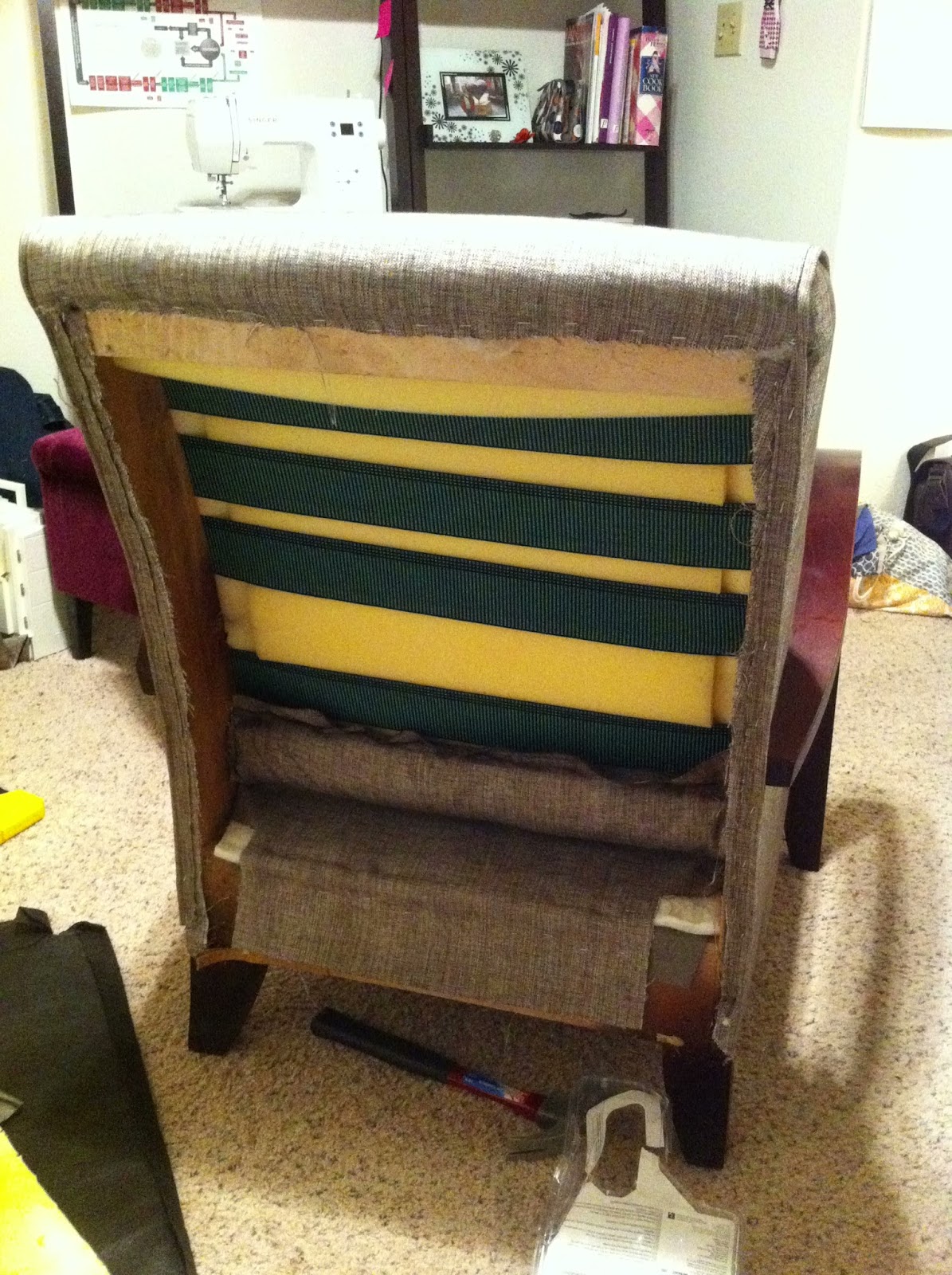 I had a three-day weekend, but Dave was back at work on Monday. I took advantage of my free day to tackle the cushion. Having sewn lots of pillows by this point, making the cushion was a breeze. I opted not to include the piping in the replaced cover partly out of laziness but also because I think it looks better without. I did manage to reinstall the zipper properly and got everything sewn together uneventfully. The cushion was basically a top and bottom piece sewn onto a continuous strip that serves as the sides. I did notice that since I sewed the top and bottom on in different directions (clockwise, counter clockwise) that the cushion has a little bit of a 'slant' to it, but I think that I'm the only person that is ever going to see that when looking at it. I was just so impressed I got the zipper back on and the cushion in it that I'm willing to overlook that tiny detail. 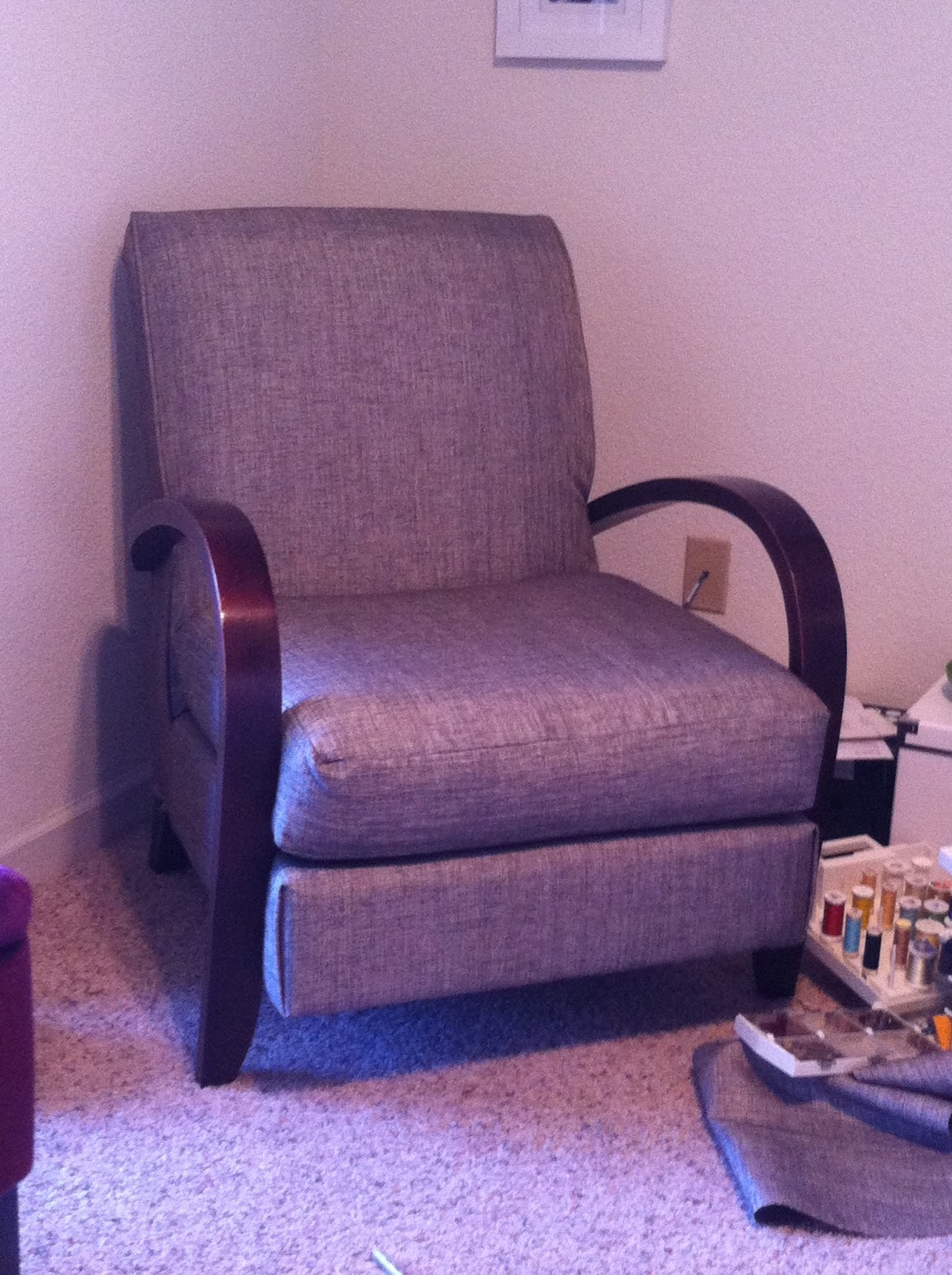 So after Day 2 of reupholstery we have a chair that could totally pass as done when put in the corner! You can't even see the fact that there's no back or bottom panels. Plus, don't sit in it, you might end up on the floor! Still, this is pretty much what it's going to look like even if the final touches aren't quite done yet…. part 3: the finale coming soon.
Posted by Alia at 8:30 AM