Well this turned out to be an awesome summery pillow. Fourth of July is a Big Deal in our town (apparently, so we've been told). Dave and I first visited on July 3rd last year to drive around and see what it was like and we had strong impressions then of the feeling of community that convinced us we should expand our search for a house down here. A small, but important thing that left that impression on me was the fact that downtown was decorated and the restaurant we ate at had red white and blue festive centerpieces on their tables. It seems silly, but seeing that and hearing the excitement about an actual parade the next day was such a contrast from the atmosphere where we lived. We were hooked. I thought of that day more than once while I worked on this project, for obvious reasons, and it always brought a smile to my face. 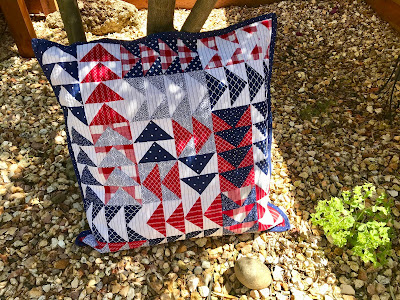 Armed with a couple of jelly rolls and a hankering to make flying geese, I browsed around online and found a tutorial for a quilt block that looked fun and doable (link here). There are some wonky bits here and there, especially where the red fabrics are since they are not quilting cotton, they are more like woven linen. But in the end it all looks great from where I'm standing and I'm not too concerned that there is a strange point or seam here and there. The block ended up 24-ish inches. I admit to not actually measuring it when I finally trimmed all the edges to behave, I just used it as a template to cut out my batting and backing fabrics. The size ended up working out great for our large throw pillows downstairs, so I'll have to keep that in mind for next time.

I found this red corduroy in my stash and I wish I had more of it for more pillows because it worked great. It was a little bit too short in one direction but I remedied that by a) putting a zipper in the middle, b) using very small seams in the fabric when joining the zipper, and c) sewing near the edge of the zipper tape rather than very close to the zipper. This strategy worked out well enough that adding the binding covered up the remaining mismatch. 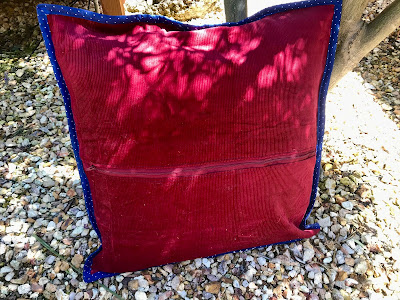 When I quilted the block, I used a piece of an old flat sheet as the "backing" of the front rather than just leaving the batting bare inside. I don't know if this matters, but it seemed like a good thing to do. I used navy thread and did more or less regularly spaced straight lines along the whole block, starting in the middle and working my way out in two directions to avoid too much creeping of the layers. I consulted the hubby and we decided on navy binding rather than scrappy, red, or white. I pulled a couple of strips from the jelly roll (and a few scraps) and made double fold binding instead of my usual single fold that I use on quilts. The reason for this is that I actually got it to be wider by sandwiching the binding around the edge and sewing it down front and back at the same time versus the traditional sewing down and folding over approach. I needed the extra width to cover up the aforementioned shortness of the pillow backing. It sounds weird, but trust me - I thought about it a few times because it was much harder to do it the way I did it! 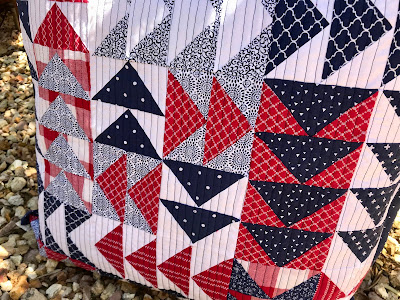 Fourth of July celebrations will likely look very different this year, we feel like we've missed out on so much already this spring!, but that's no reason to not at least embrace some of the atmosphere. I'm looking forward to decorating this July!
Posted by Alia at 12:57 PM