Well. After getting back into my sewing groove I must say things escalated quickly! Pineapple blocks took root and multiplied until I had a whole crop of them in just a few afternoons. Having precut all of my strips and organized them I was able to chain piece and iron very efficiently. Efficiency isn’t always the point, but is quite satisfying. 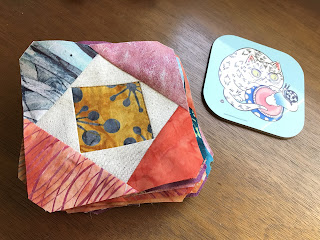 Another satisfying result was randomness. I was wondering if I would have to fiddle around with which print went on what square as I was going, but I was able to cycle through my stacks of strips pretty mindlessly (which is great for relaxing) and end up with a random looking assortment of prints in each block. I didn’t worry too much about repeats but I wanted to make sure that no line had the same print next to itself and no round had the same print in it for any given block. 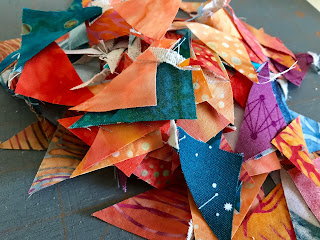 Using plenty of steam in the iron helped the pressing go more rapidly, and perhaps more neatly? I do think that steaming makes a nice crisp fold despite the risk of warping fabric out of shape. A little bit of care, or at least consistency, makes this something I don’t tend to worry about. As I trimmed things up I popped each finished block up on my design wall. The blocks all assembled makes quite an impressive sight! I moved a few things around to avoid like next to like fabrics, but overall the whole thing came together really nicely. I just have to sew these all together now, making sure to match up those seams as best I can. There are so many of them! 3.75 bobbins’ worth in fact. 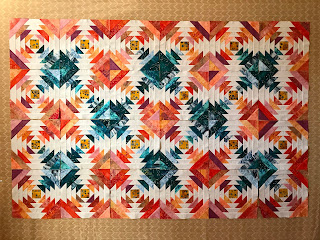 The pattern calls for some borders. I don’t think I have enough of the leftover fabric to make borders happen and I can’t go back to the fabric store just yet, but that will be a puzzle to solve for later this week.