This week saw a lot of activity in the craft room and the garden. I feel like I've hit my stride of a "new normal" a little over two months in. Aside from wearing masks when we go out and going out much less often (sorry, Target runs!) it feels like in general things are getting a little bit better around town, too. Restaurants aren't open yet but many are doing a bustling take out business, and it's difficult to find hand soap in the grocery store, but flour and other staples are back on the shelves. We've got a long way to go until anything feels anywhere near a true normal, but at this point we've come a long way and at least there is starting to feel like there is some sort of "routine" that can be applied to life instead of waiting behind closed doors for the next big piece of news. While I didn't spend much time this week trimming little HSTs of red, white, and blue, like I thought I would, I did decide to dive into my scrap jars. I was inspired by a post I saw from someone that made six (SIX!) quilts from the scraps she had from last year. I don't have anywhere near that amount from a single year, but I've been collecting for a while so I wondered what I would be able to get out of my jars that I admittedly haven't really gone into at all since we've moved and for even longer before that. 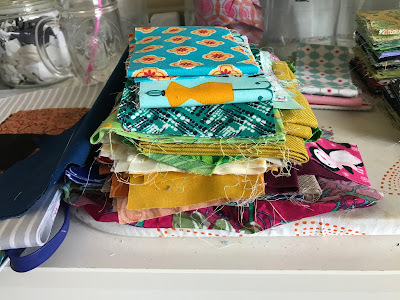 So jar by jar I pulled out scraps and ironed them flat. Once I was done with the jars I found my little blue metal can of scraps and found even more that didn't fit in the jars that I'd forgotten I had. It was a lot of work, but I ended up with some very tempting piles of fabric in all shapes and sizes. One of the quilts I saw was a really neat one done up with 2.5" x 3.5" triangles, so I aimed to get as many of those as I could. The rest of the pieces wound up as 8" or 10" squares if they were large and then all sorts of smaller sized squares for smaller pieces. I chose 5", 4", 3", 2.5", 2", and 1.75" squares because that seemed like a good mix of useful sizes for a variety of things. 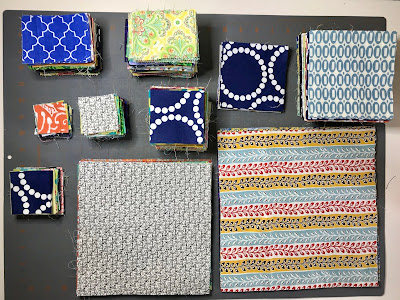 It was a lot of work and many hours of effort, but totally worth it. It's like I've made my own little charm packs and layer cakes! This way the scraps are significantly more likely to be used. I already have plans for the rectangles to turn into a quilt. I'm not totally sure if the other things will end up as quilts or end up in smaller projects like pillows. Likely some of both and they will be both scrappy and chaotic as well as more coordinated because shopping these piles is going to be a breeze. 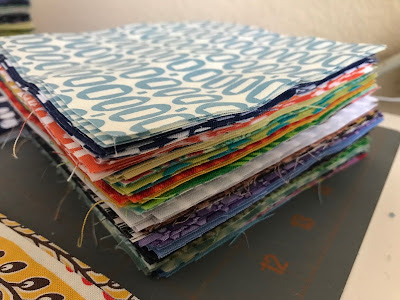 I also ended up with a large collection of strips of many lengths and thicknesses and some little "crumbs" that seemed too good to throw away. I rolled these up and am storing them all together for some string block projects and maybe some log cabins will appear as well. I had been thinking of doing some improvisational piecing using the scraps from my jars for a while now, and these seem like great candidates to play around with on some quilt-as-you-go and more impromptu fabric play. 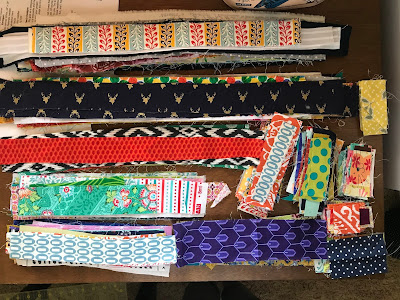 I definitely also found some larger pieces that are destined to end up as fabric baskets, too. ;)
Posted by Alia at 3:30 PM

Email ThisBlogThis!Share to TwitterShare to FacebookShare to Pinterest
Labels: scraps